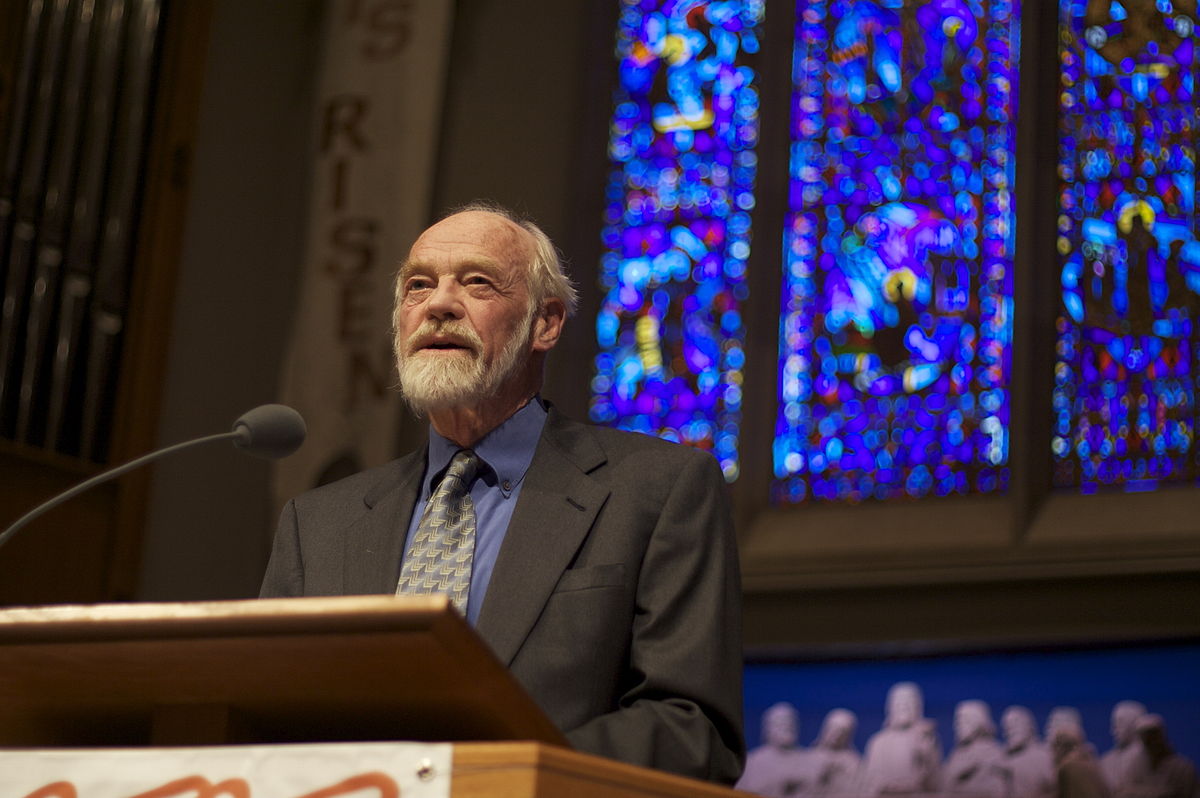 If you’re reading this, you’ve probably already heard the news. Pastor, scholar, writer, and professor Eugene Peterson has apparently changed his view on same-sex relations and marriage. I’ll tease out what I mean by “apparently” below. But I first want to acknowledge that Eugene Peterson has had a massive influence in my life and will continue to do so. His books are among the best pastoral resources available and his translation of The Message has blessed my own life and the lives of millions of Christians around the globe. Eugene is a pastoral legend, a prophetic voice in the American evangelical church. And I'm a better Christian because of him.

God never requires perfect character or belief to be used. Moses was a murderer. David was an adulterer. Ruth dowsed herself in oil and snuggled up to her ½ drunk cousin in a barn. And the great apostle Peter was accused by Paul for “deviating from the truth of the gospel” (Gal 2:14), yet God still moved him to pen two inspired letters and help Mark write the gospel that bears his name. Unfortunately, our celebrity-driven culture has spilled over into the church and hinders us from viewing our heroes of the faith—ancient and contemporary—as imperfect vessels worthy of praise one minute and critique the next. I still admire the heck out of Peterson. Always will. But I believe he’s terribly wrong on this one.

But what is “this one?” According to Twitterverse, he now affirms the sanctity of same-sex relationships. And maybe he does. I mean, he probably does. But with such a sensitive and important topic, I wish he could have been more clear. He said:

I know a lot of people who are gay and lesbian and they seem to have as good a spiritual life as I do. I think that kind of debate about lesbians and gays might be over. People who disapprove of it, they’ll probably just go to another church.

I snoozed my way through this statement. There’s nothing here that requires a redefinition of marriage. I too know many amazing gay and lesbian Christians whose spiritual life is better than mine. Peterson talks about his gay and lesbian friends but doesn’t say anything about same-sex sexual relationships or his view of marriage as a whole. However, when Jonathan Merritt, the interviewer, asked Peterson if he’d perform a same-sex wedding ceremony, Peterson said “Yes.” No explanation; no further comment. I guess this means he affirms the sanctity of same-sex marriage, and yet I know some non-affirming pastors who would say the same (though with a bit more clarity and explanation).

I’m also not sure what Peterson means by “that kind of debate about lesbians and gays might be over.” What debate? That people are gay? That some think that simply being gay is bad? That gay people can be Christians? That gay people can come to church? That some might have a better spiritual life and Peterson? Or what? And what does he mean by “people disapprove of it?” What’s the “it” referring to exactly? It’s tough for me to know what it is he’s even talking about.

In any case, let’s just take his “yes” to performing a same-sex wedding ceremony to mean that he has changed his view of marriage. That is, let's assume that Peterson now believes that marriage is not a one-flesh union between two sexually different persons, but a union between two consenting adults where sex difference is irrelevant. I’m still waiting for some sort of theological and ethical reasoning for his change—but I suspect I’ll be waiting for a while.

Without any theological explanation from Peterson, I can only shrug my shoulders at his naked “yes” and move on. According to Scripture, sex difference is part of what marriage is, and whenever same-sex sexual relations are mentioned, they are considered to be sin. And billions of Christians historically and globally have agreed with these claims—remarkable, since Christians have disagreed on almost every other doctrine in the historic Christian faith. The fact that a few mostly western, Protestant, 21st century Christians no longer agree with this is but a blip on the historic Christian story.

If God really does celebrate same-sex unions and has designed marriage to be a genderless institution between two consenting adults where sex difference is irrelevant, then he certainly could have made this much clearer. I can’t imagine that the God who praises those who “tremble at [his] word” (Isa 66) is bewlidered that someone could read Scripture and believe that marriage is between a man and a woman.

If I can be honest, Peterson’s change in view is a real yawner to me. Respectable people hold all kinds of views that are radical departures from a Christian worldview. Martin Luther was anti-Semitic. Calvin burned a guy at the stake. Some wonderful people I know still believe that America is a Christian nation and that Trump is the greatest thing to happen to Christianity in America since Ronald Reagan. Obviously, I'm not saying all these things are the same (antisemitism, murder, syncritistic nationalism, and same-sex marriage) as some analogy police will say. I'm simply saying that I can still respect people and learn from them in some areas, even if I think they're out to lunch in other areas. Sometimes, really smart people believe things at odds with a truly Christian worldview.

So when a contemporary hero of the faith ends up redefining marriage with no theological, biblical, or ethical explanation—and what little reasoning he gives is uncharacteristically unclear—I don’t call this a terrible day for evangelicalism. I call it Wednesday.